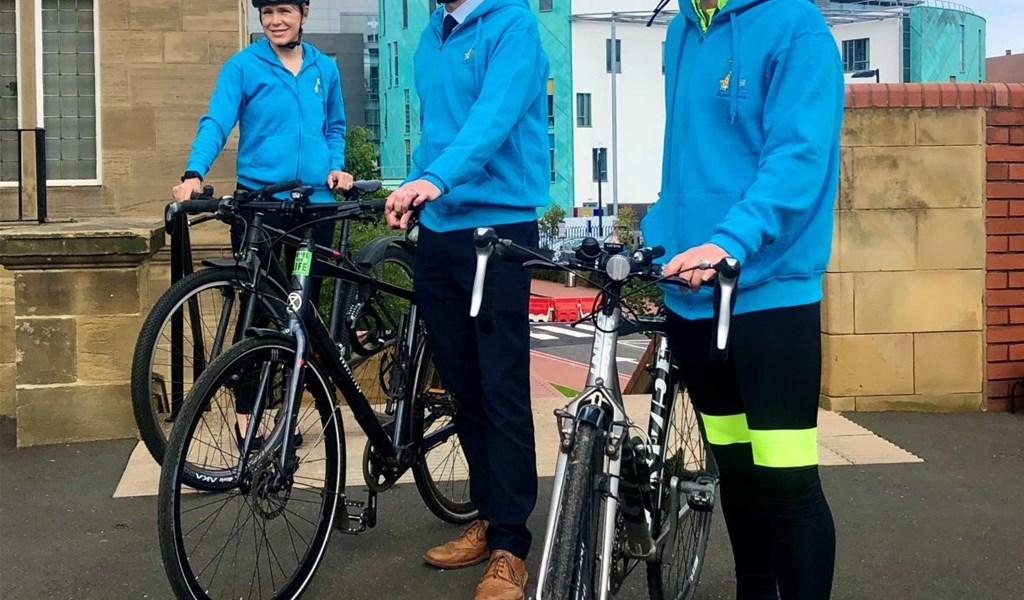 Newcastle Hospitals staff to cycle from London to

to raise awareness of climate emergency

Staff from Newcastle Hospitals are taking part in a cycle ride from London to Glasgow to raise awareness of the impact climate change and air pollution can have on the health of children.
Dr Mike McKean Consultant in Respiratory Paediatrics at the Great North Children’s Hospital will join James Dixon and Teri Bayliss as part of a 70 strong group of healthcare workers taking part in Ride for Their Lives – a 500 mile ride from Great Ormond Street Hospital in London all the way to the Royal Hospital for Children in Glasgow to coincide with the global COP26 climate conference.
After setting off from London on 24 October, the team will visit a number of children’s hospitals on the route to Glasgow, including, Sheffield Children's Hospital, the Great North Children's Hospital in Newcastle, and finally the Royal Hospital for Children Glasgow. The group of riders includes healthcare staff from these children’s hospitals, as well as Evelina London Children’s Hospital, Great Ormond Street, and Bristol Royal Hospital for Children.
At each stop the cyclists will be joined by an art installation – Pollution Pods – which simulates the most polluted air on the planet.
Globally, air pollution kills an estimated 7 million people a year and in the UK it causes an estimated 28,000-36,000 premature deaths a year. In a landmark ruling last December, air pollution was named as a cause on a UK death certificate for the first time, in the case of 9-year-old Ella Adoo Kissi-Debra, with the coroner stating that the adverse effects of air pollution on health are not being sufficiently communicated to patients and their carers by medical and nursing professionals.
Healthcare providers have a key role to play in addressing low public awareness of the health impact of climate crisis and declining air quality.
Newcastle Hospitals is well known for its award winning Shine (Sustainable Healthcare in Newcastle) programme and was the first healthcare organisation in the world to declare a climate emergency, in recognition that the climate emergency is a health emergency. The Trust is also committed to the ambitious goal of becoming a net-zero carbon organisation by 2030.
James Dixon, Associate Director – Sustainability at Newcastle Hospitals said: “We’re riding as a group of healthcare professionals to highlight the health emergency that is the climate emergency. Whilst climate breakdown can seem quite distant to us at times, air pollution associated with the burning of fossil fuels is a more tangible problem that we know is limiting the health of our communities day-in-day-out. The journey will be long and difficult, but it will hopefully act as inspiration to others in order to protect child and planetary health”
As well as raising awareness the group are also raising funds for Newcastle Hospitals Charity. Donations will help to support some of the innovative projects from across the Trust to help Newcastle Hospitals become more sustainable. Projects include introducing reusable specimen transport boxes which have eliminated 1M single use plastic bags per year and trialling the use of e-bikes for paediatric physios.
Most recently the Trust became the first in the UK to make use of climate friendly gas and air technology after Newcastle mum Kaja Gersinska used it as pain relief during labour.
Teri Bayliss, Director of Newcastle Hospitals Charity said: “Supporting our hospitals efforts to lead on being sustainable is a key aim for Newcastle Hospitals Charity. Alongside this, and related, is our commitment to addressing health inequalities and key health issues. Our communities don’t choose for their health to be affected by air pollution and it is the responsibility of us all to address this for today and for the future. The challenging journey represents what can be achieved collectively, as well as delivering the important message that we all must act to tackle the climate emergency.”
The ride is organised by Climate Acceptance Studios, who will be delivering demands for action from the global health community at COP26 in Glasgow.